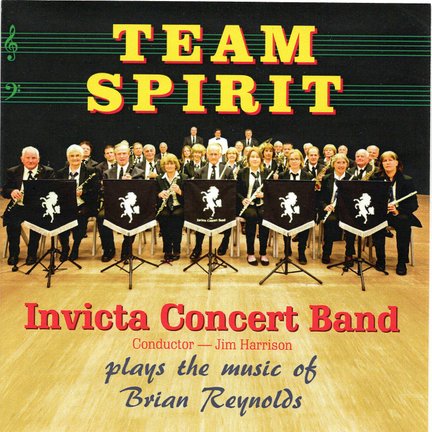 IN 2014 the Invicta Concert band had the privelage of not only performing but recording the works of Kent based composer Mr Brian Reynolds. The CD consists of a total of 28 Tracks which includes 6 pieces on the Clavinova performed by the composer himself. The Band pieces were recorded in a one day recording session at the Bands home rehersal venue the Herne Bay High School in Kent.

Copies of the CD are available for purchase using the contact form below:-

To order a "Team Spirit" CD please enter your Name / Email address in the contact form above together with your postal address in the Message box. Our Chairman will make contact with you to arrange to collect your payment of £10.00 + £2.50 p.p.

On behalf of Brian Reynolds and the entire Band we would like to thank you for your support.